Thankfully the London flight was only just over half full so we had a spare seat next to us which made the journey better. My initial seat decided to break during take-off and lurched back onto the poor sod behind. The trolley-dolly and my travelling companion both denied any problem, but ultimately understood.

We watched All the Pretty Horses, Sweet November and Anti-Trust. Our arrival at Heathrow was exciting until the poxy, mongrel bastard ATM ate my card. Had coffee and coopa-tea.

The bus was ye goode olde fashioned red double decker. The trip was really enjoyable- we got off early to see a bit of greater London. The bus dropped us off at the end of Oxford Street, near Marble Arch- at the corner of Hyde Park and we walked the rest of the way.

This turned into a major feat- no map and only a vague idea (This became a major theme in our travels over the next fifteen years- Editor). Eventually we made it after asking for directions several times and then ringing the hostel.

The room is interesting. Small, a bunk, a cupboard and a sink. It overlooks a construction site. The kitchen and lounge are clean and comfy. There is internet access, a laundry and lots of tit-bits for sale at reception.

After a shower to freshen up we hit the streets- very tired, but needing to stay awake as it was the middle of the day. Four hours sleep in over 24 is not enough.

First stop; lunch at Benji’s on Oxford Street- then a quick trip home for a jumper and umbrella then we were off. Bought a map at a local stall and there was no stopping us. We zig-zagged through the streets of Soho down to St Martins-in-the-Fields church.

Across the road, Trafalgar Square is very impressive. Down Whitehall, past Admiralty Arch, the old war offices in Downing Street, onto the Houses of Parliament and Big Ben and across the way to Westminster Abbey- back to this another day for a look inside too.

Next down to the river just near Westminster Bridge and pier- there’s a good view across the river to the London Eye and the county hall. Walked along the Victoria Embankment up to Cleopatra’s Needle. Very impressive because of its age, but also because of the bog holes and missing chunks from bombing during the war. Also, interested to read that the embankment is only fairly new in the big scheme of things and the river’s edge was in fact about 150 metres from its current position.

Took a photo here of the gate that was once the river’s edge- of course I can’t think of its name at the moment! (Google it, kids- Editor). Made our way to Leicester Square and through Chinatown in Soho to a pub called the White Horse. Looked like a good old English pub- turns out three Aussies and a Kiwi work there. Anyway, the beer and shandies were great.

Walked past a theatre on the corner playing The Graduate- hope to come back and catch it one night. On the way home, we stopped at the supermarket to get a few supplies- things were reasonably priced, then up Berwick Street past the markets which were just packing up.

Back at out hostel we stored our stuff and had a drink before going to bed. Walked around a bit trying to find a good pub and ended up in the Blue Posts for a quick one, then hysterically tired, headed home to bed- still daylight, but four hours sleep in over 36 is just not enough.

In bed at 8pm and not many minutes with the head on the pillow before drifting off into a well-earned long sleep. 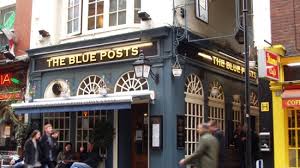