As Wordsworth lamented, doubtless about Mondays, “the world is too much with us” and on the first day of the week he’s right. Thursday and Friday are too frivolous for these matters, and Wednesday, at least in my house, belongs to Micallef and Mad as Hell.

Formerly, if somewhat brazenly called Sex Ed, the evening session of Growth and Development for children and parents begins at our primary school.

Looking about from the back row I see Max’s soccer coach and his son, our neighbour and his lad, and other slightly uncomfortable children and their significantly more uncomfortable mums and dads. Alex tells me he helped put out the chairs. We’re in the school gym. While it’s a place of fun and games I wonder about the kids for whom sport means humiliation and tears.

As such tonight’s about puberty.

The presenter is sunny and welcoming and she has a PowerPoint with amusing cartoons including the compulsory picture of a boy at his local pool on the diving board. It’s obvious to the world that he finds particular physical pleasure in wearing Tony Abbott swimwear.

We discuss a diagram of the female genitalia and use a glossary to identify what’s what. Working through the list our leader says, “Can anyone tell me another word for labia?”

We then had the legislated vulva and Swedish car joke which always goes down well, especially on a warm Tuesday night in a beachside suburb.

Moving to the male anatomy chart the cheerful host pauses at scrotum, as we all do, and asks for alternate names.

“Ball sack,” yells a small boy up the front of the gym.

“Good, good,” replies our expert and then in a synonymic surprise she chirps, “Now does anyone here call it a Santa sack?”

There’s much roaring from the floor. Alex and Max jump and dance in their chairs. Your correspondent guffaws.

I then find myself contemplating Vas Deferens, and wondering if as well as starring in the Male Reproductive League (MRL) he was a footballer in the 1970s. I can hear Rex Hunt calling, “Vas Deferens collects the air conveyance, breaks a tackle and goes looooong!”

What characterised his career? Impressive clearances (of course) and dour defence, but he couldn’t lock down a spot with Carlton, so moved to South Adelaide in the SANFL, played one hundred serviceable games and now runs a pizza bar at Port Noarlunga where among older footy fans he enjoys a cult following. To this day not even his closest mates call him “VD.”

Our host subsequently speaks of each male producing 30 to 250 million sperm per millilitre of semen and I feel proudly productive, if suddenly tired.

The PowerPoint then shows a teenager mid-wet dream and I’m sure the dads in the gym become distantly nostalgic although no knowing nods are exchanged among us in the back row.

Our final topic is on being kind to yourself through the challenges of puberty. We’re reminded that being a loyal friend is far more important than any temporary looks, and how we should think of the things we’re good at like caring for others or reading or helping at home.

She then asks us to be glad for other blessings, and I lean in to Alex, newly twelve and veering between young man and innocent boy and whisper, “I know you and Max are grateful for Dad’s tremendous comedy” and he punches me on the thigh with affection and I feel pleased for this tiny moment.

Walking home I’m keen to talk about our evening, but excited and with pent-up energy, the boys run and wrestle and bounce along the footpath like an enthused epididymis and I don’t mind. They’re busy being kids.

We’ll speak of sperm and scrotums in the morning. Or not.

There’ll be time next Monday. 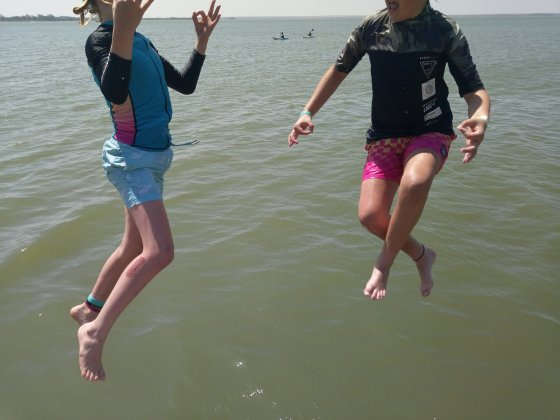