Once upon a time we took photos by cars. Were vehicles more important when we were young? I suspect they were, and now we’re defined by other things: family, houses, work.

Here’s some old photos. Each tells a story.

Some friends- Chris, Stephen, Rodney and I bonded while at Kapunda High over a shared ownership, and then, love of the iconic Adidas shoe, the Rome. We became the Romers. There were four of us, and in this snap we’re heading off on a trip in Stephen’s Holden Gemini, but for reasons I can’t recall, Rod is absent.

Of course, we’re all blubbing and bellowing into our hankies, wondering how we’ll cope without Rod.

Why did they stop painting cars in that particular green? 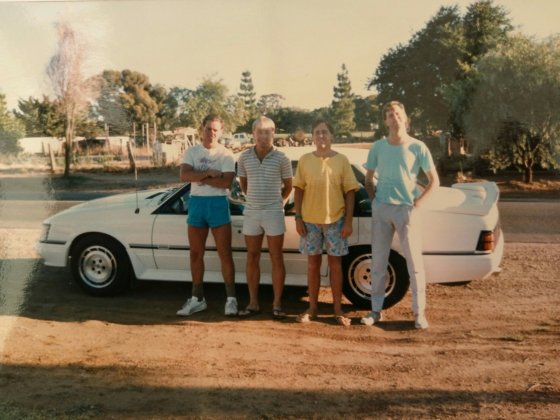 In 1988 Paul, Mikey, Chrisso and I ventured to Melbourne in Paul’s VK SS Commodore. It accelerated, as they say, like the clappers. We went to the MCG and saw Dean Jones up close, hitting a few in the net. I was keen to see the Australian captain, Alan Border, bat. After some refreshments I wandered down in the bowels of the stadium to use the facilities.

Coming out into daylight and blinking, I looked at the scoreboard. AB had made a duck. It was the last time full-strength beer would be served at the MCG for many a year. 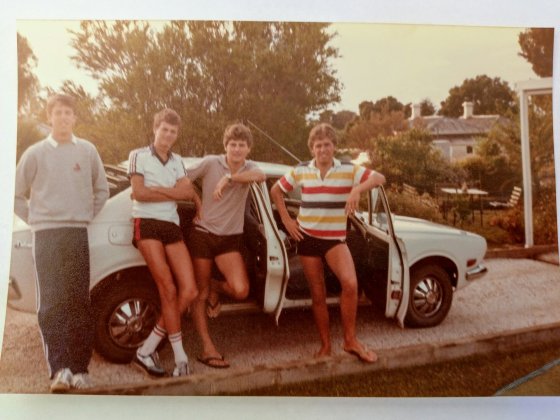 In January of 1985 Woodsy, Chrisso, Trev and I drove to Sydney to stay with Stephen and Brendan in Drummoyne.

Yes, Woodsy and I are wearing Adidas Mexicos shorts, which for humanitarian and visual arts reasons are now banned.

On the way we stopped in West Wylong and met some local girls who, apparently because of our accents, thought we were British. In Sydney we played cricket, and went to the SCG and saw Simon O’Donnell make his debut while sitting on the Hill. We swam at Curl-Curl, Bondi and Manly. It was innocent fun. Then we went to Kings Cross where our country boys’ eyes were widened.

We also went to the Basement to take in some jazz. One afternoon in The Rocks we saw Kamahl and his Rolls Royce.

Ah, the days of the Road Trip!