In early 1994 old Kapunda mate, Bob Bowden and I went to New Zealand. Of course it was illegal back then to not undertake a Contiki tour so you could travel to exciting, distant lands, meet fellow Australians, and spend your evenings in exotic pubs arguing about footy, cricket and which state made the best pies.

In a shameless attempt to impress the locals I took a range of Canterbury clothing with me, including this, the timelessly stylish top known as an “Ugly.”

Here’s Bob on a windy hill overlooking Auckland in his Kapunda Bombers- themed red and black outfit proving again that the 1990’s is not as hideous, fashionistically, as the 1980’s. If it were Brownlow night a reporter would ask Bob, “And who are you wearing?”

If you peer at the cricket ground in the middle distance you’ll see Sir Richard Hadlee, smirking up at us, for no good reason.

Upon returning to Kimba my Year 9 English class was decidedly unimpressed when I included this Kiwi place name in their first spelling test for 1994.

A highlight was ascending and then descending, perilously, the South Island’s Fox Glacier. Although my GS Chappell floppy cricket hat came in useful that day, there is no truth that a sudden hail storm gave it its first and last wash in over thirty years.

This hat is now tragically banned from all overseas travel. It can not be issued a visa. 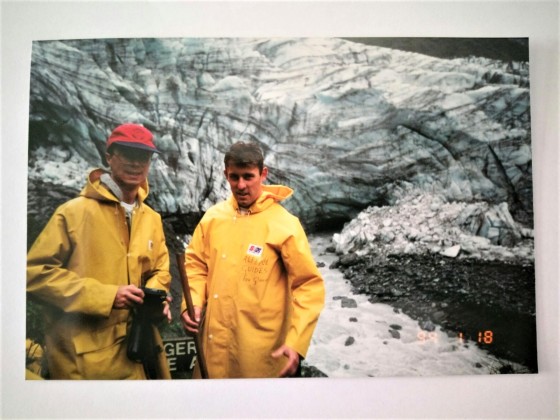 I’m forever indebted to David, the English bloke on the left, who pointed at the grim base of Fox Glacier and quoting a classic British comedy said to me, “See that freezing death trap over there? That’s your backyard in summer, that is.”

What trip to the hotspot of Queenstown is complete without a toga party? Toga! Toga!

As Doug Neidermeyer declares in Animal House, “And most recently of all, a “Roman Toga Party” was held from which we have received more than two dozen reports of individual acts of perversion SO profound and disgusting that decorum prohibits listing them here.”

NB- my boatshoes as worn in Rome 34BC.

While we didn’t see any sheep statues- no, seriously- we did spot this bronzed sheep dog who refused to fetch the stick I threw.

Our tour finished in Christchurch by which time Bob and I had introduced our travel mates to the ancient art of Spoofy. A game of chance using three coins the loser has to buy all the participants a beer. The UN should use it as a diplomatic strategy to resolve international tensions.

In fact , I think Bob Hawke once did.

This was a quarter of a century ago. Time to return methinks.