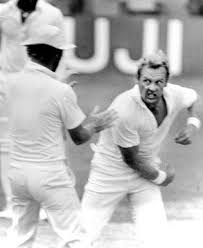 The satirical polemicist Voltaire once asked, “Is there anything better than a brisk lunchtime session in the Cathedral Hotel, on the first morning of an Ashes Test?”

In all matters philosophical and cricketing our French friend is accurate so I presented myself at the revitalised old boozer. It’s a Keith Stackpole jaunt from Adelaide Oval; our tremendous, alluring oval.

Friday night at the Adelaide Lutheran Christmas function (Catholics now admitted) Harmsey said, “Meet you at the Cathedral pub. 11.15.” I was enthralled and curious that the declared time wasn’t 11 or 11.30, but 11.15. This promised things exciting or dimly dangerous or both.

Whilst grateful I cling to a heady dream in which my ear is bent by this thrilling invitation: Meet you tomorrow in the _____ Hotel. Front lounge. 4.37 pm.

4.37. How good would this be? Who could resist such an exotic offer?

Strolling in from the misty wet the ancient Barossan adage swirled overhead, as it must for those with a connection to its verdant valley: One at eleven, or eleven at one. The Cathedral was bellowing; part matinée circus, part West End production. The Barmy Army merchandise card-table in situ, its custodians in throaty, summery cheer. Only 11.15? It was as if the pub had been throttling along for hours. Perhaps it had.

For me, an unsurpassed way to invest an energetic hour or two is to stand about a tavern’s table, by an open window, with a loose knot of like-mindeds, and trade cricket yarns: personal, public and apocryphal.

And so we did.

Outside, a curiously impotent army of Warwick Capper number 39’s had mobilised, while inside, PJ Flynn and company attacked their fare (2016 Burgers of the Year, no less. No word yet on the 2017 winners- I’ll keep you posted) and the stories impatiently assembled.

Of course, after the obligatory SK Warne and IM Chappell anecdotes, we migrated to RM Hogg. When he played for Australia I was a kid who loved his ferocious bowling, and the hostility with which he steamed to the wicket; all Serengeti chesting, and scowl. He presented as one you’d have on your side, in a fight (Do cricketers have scraps and footballers have barneys?). Even his blonde locks flounced with anger.

After his international career concluded Rodney played in Willowfest: the Australian amateur cricket championships, up in Mildura and Wentworth. Hoggy remained properly livid and fast. One afternoon his captain threw him the ball.

As he paced out his run-up a mischievous scorer, grasping the demon quick’s permanent volatility, yelled out towards the 123 Test-wicket veteran with faux ignorance, “Bowler’s name?”

From over my Coopers Session Ale in the Cathedral I could envision Hoggy’s lips tightening in a snarl. He didn’t bother to respond. But his captain did. “Hogg” came the reply.

Not done yet, the scorer chirped again, “One ‘g’ or two?”

As the yarns volleyed across our ales, a film-crew strode in and captured one of the Barmy Army, in staccato, bursting voice. By now the Wiz and his post-modern disciples had either departed, or been moved on by management. Perhaps Dr G Edelsten had invoked an injunction.

The Don DeLillo of cricket authors, Gideon Haigh, shared some probing insights on Jonny Bairstow, Ben Stokes and the outlandish turf wickets he’d encountered recently in Melbourne. As lunchtime pub entertainment and education, it was unparalleled.

I was asked of my earliest Adelaide oval cricket memory. It was the 1974/75 Ashes with Dad. On the scoreboard hill among fractured foam esky lids like Canadian ice-floe, and floppy towelling hats reminiscent of those draped upon Arthur Dunger, I recalled an over each from DK Lillee and JR Thompson. This closed the day’s play.

To my eight-year old ears the noise was a pyroclastic event. I was exhilarated by the vivid and escalating possibilities as they splashed across my bow.

My next Adelaide Oval experience, I recounted to Flynny, was one Sunday during a match against Tasmania in the 1982 Sheffield Shield season. Some Kapunda contemporaries and I had wandered in and taken our seats in the former Sir Edwin Smith stand. The crowd was dotted about like inmates in a TB sanatorium. 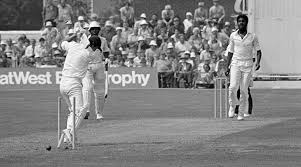 I only recollect the spell of Michael Holding.

As accepted fast bowlers are athletes until they reach the crease, and Holding was supreme in his gliding beauty. Pace men such as Craig McDermott and Mitchell Johnson are menace and violence as they tear in. But the West Indian was noiseless and painterly.

With the Taswegian keeper back halfway to the Cathedral End fence, it seemed that at the moment of release the ball, instantly forty yards away, was being scooped across to second slip.

Neither the batsman, nor I, were optically able to track the fig. I became aware of a remarkable connection between mechanics and biology. This became metaphysical majesty. I was slack-jawed. We all were. I don’t know if Holding took a wicket during our short sojourn. And, in many ways, an edge or explosion at the castle would have spoiled this most bewitching of sporting vistas.

Time had passed, and all by that window had an engagement, so we left the pub. Across the road, an Ashes Test was waiting. 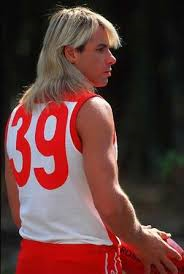