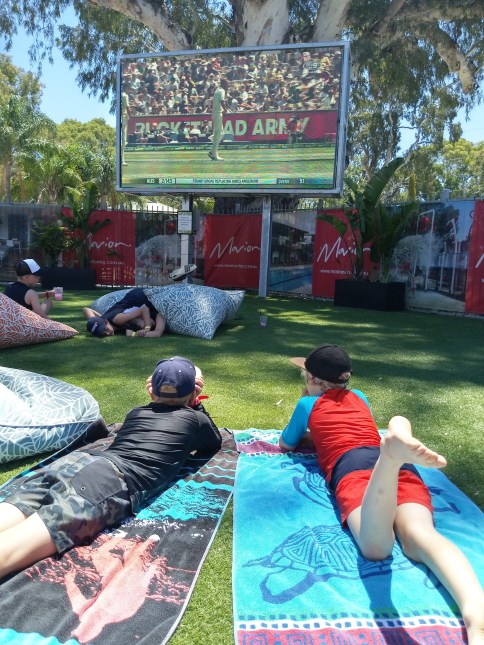 There is no question.

This is the best photo I’ve ever taken. Nothing in Iceland. Forget the Grand Canyon. Rule out Iron Knob.

Every compositional element is within. Summer in that magical time between Christmas and New Year. Holiday park. Our boys. Big screen Test cricket. If you move the camera slightly to the right. There, that’s it. Yes, that’s a cup of crisp pale ale. Perfect.

We’ve been on a short getaway. A holiday. A self-contained location with all the amenities. It’s brilliant, and after three separate visits in 2017 it’s a favourite. We’re getting to really know the terrain.

When I was a young, numpty/teenaged type, with all the attendant boof-headedness this implies I found considerable mirth in someone I know once knocking on the door of a school-mate, saying, “Is Billy home?” His mum gave a sincere, nodding reply, announcing, “No. He’s gone on holiday, to Greenock.”

From this, the closed ancestral home of Kapunda to Greenock was a steady ten minutes in the family Valiant. Roar! How we laughed! How could this be a holiday? I’d ridden my (sister’s) bike there and back!

But, tonight, to you, with sincerity and delayed wisdom I confess that we’ve spent our Yuletide break about eight kilometres down the road. Not nearly as far as Greenock.

Why? Because it’s terrific, we can slip home and feed the dogs, and pick up some essentials like eggs, a torch and some extra-cold Sparkling Ale.

I also reckon it’s because I now know that a holiday is not about the distance travelled, but locating a fitting headset, and finding a place that works.

Here’s the other key attraction. Our boys, Alex and Max stay there in the compact camper-trailer with one of us, while the other, eases into the car, and DRIVES HOME TO AN EMPTY HOUSE (APART FROM THE DOGS) FOR THE EVENING.

For those of you who’ve forgotten, this means the non-holiday park parent gets, in the morning, with its luxurious new light, to wake up without provocation, and avoid the existential horror of being WOKEN UP. 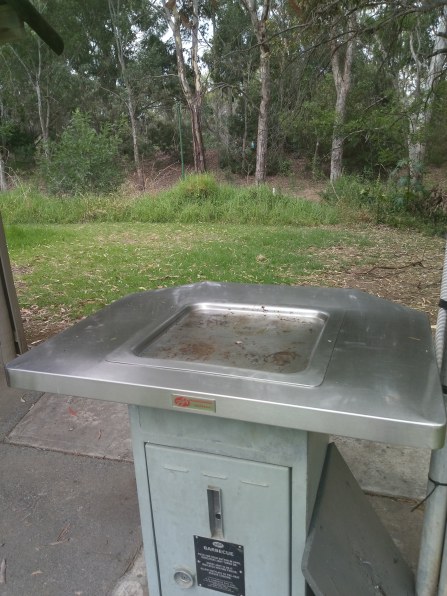 Developing a functioning relationship with a holiday park includes locating a barbeque who’ll love you back. One who’ll respect you, and also not give you any nonsense.

This one is gentle on a sausage, appropriately robust with a chicken patty, and massages a steak like it should. It’s also by a creek and some friendly trees. I like it.

But this bugger, yeah, this one here-

It looks sleek and cooperative, but it’s benign appearance is deceptive. It doesn’t cook, which, if my dictionary serves, is the job of a barbeque. It’s Yorkshire on Boxing Day. I may give it a kicking.

You may as well line up six of the park’s dopey yet kindly ducks, point their arses at your chops, and light their farts. 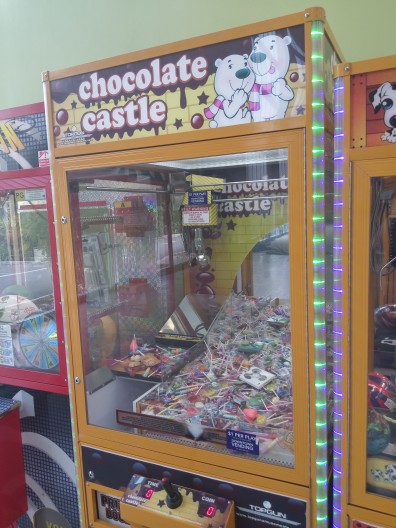 A modern holiday park offers entertainment for the kiddies and this one has a huge games room, complete with multiple distractions, including Space Invaders and its crazy derivatives, and shoot ’em up adventures. In a symbol that captures the regard with which we hold this fantastic space there’s also a Skill Tester/ Grabber.

And for the first two days it was free!

This morning after a tremendous sleep-in Max stumbled out of our tent, nodded vaguely at me, and marched straight to the games room, such is the hypnotic power of the Grabber. I yelled “Fried fritz?” at him but he shuffled onward.

When a boy refuses fried fritz, we all know life is a-changin’. I’m not sure of how many chocolates our boys extracted from this contraption, but it was, as my old boss would say, a goodly number.

Since we visited in March a beer garden has been added. How can this space get any better, I hear you ask? Next to the pool, there’s a giant TV screen, grassed (fake) expanse, assorted beanbags, under-cover booths and agreeable bar and kitchen.

Yes, it is one of our tiny world’s best spaces. If I were a ghost you wouldn’t see me here, on a chair.