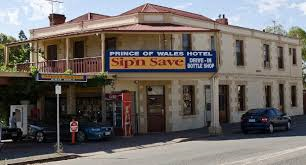 I’d driven non-stop for over four hours, dodging kangaroos, AM radio (up next the latest from Danni Minogue!) and berserk truckies like the one in Spielberg’s Duel, and Friday-exhausted, fell into the front bar around 8pm. It was a hike from Kimba.

The blunt cranial and corporeal references are like warm handshakes. These are Puffa’s way of welcoming me into his cosy pub. His is an inclusive environment: no-one is spared his jibes, and these are all part of the boisterous charm. To not be abused would be offensive.

But to understand the publican we need to know more of his curiosities. He was fond of a mid-week luncheon and these sometimes included local identities such as Norton Schluter. Norton ran the Greenock Creek Tavern: a Barossan boozer with such similar atmospherics it could be a sister pub to the Prince.

Legend has it that Puffa and some captive chaps once when out to lunch. When traversing the state Puffa preferred to sip cans. He reckoned they “travelled better.” Post-dessert they inexplicably then drove to Broken Hill in the big publican’s even bigger Falcon and returned four days later.

The Prince of Wales is a snug pub with a front bar like a lounge room. It’s this spatial dynamic which assists the natural intimacy.  The decor is spartan and the space is dominated by the beautiful, antique pub fridge with timber doors and those ancient chrome door handles. About the bar are maybe ten black-topped stools.

Often, early in the afternoon, there’d be but a single conversation with the tethered denizens such as Roger and Matesy, and the quips would shuttlecock about the bar and there’d be volleys of chirping from in their cups.

Retrospectively, I can see that chief among its attractions was a clear-minded absence of TAB, thumping music, big-screen TVs and dining options. The Prince was solely dedicated to conversation and cups although I recall watching the 1989 Grand Final in there on, I imagine, a boxy old Rank Arena, and willing on Ablett the Elder before the clock ran out.

It was a venue for personal firsts. On a lazy Sunday afternoon I was introduced to the English public school tradition of spoofy which initially only required three coins but, if you lost, it resulted in significantly more fiscal investment, especially if there were six or seven of you in a roaring circle. And the pain of loosing to Goose or Whitey went far beyond the mere monetary.

Also in 1989 some mates and I hired a VN Commodore wagon and headed to Brisbane for about three weeks. Of course, we set off from the Prince. Ever the social benefactor Puffa said, “Here you yo-yo’s take my radar detector. I’ve seen how you blokes drive. It might save you a few bucks. Just bring me back a carton of that new Powers beer from Queensland.” And the detector did ping numerous times across New South Wales. We delivered Puffa his slab.

I also remember old mate Trev and his band ‘Imelda’s Shoes’ playing one Sunday afternoon in the bottle-o drive way. I stood by the war memorial as the drums and guitar blasted down Mildred Street.

Puffa loved a bet. Up on the wall behind his bar, next to the clocks, was a row of coasters on which the wagers had been scribbled. It was like a silent bookie. Puffa once said to me just after Christmas, “Don’t worry about the Sydney Test, smack head. It’ll be a draw. It’ll be rained out.”

Of course, Fanie de Villiers bowled South Africa to victory in a rare, entirely rain-free Test. After I returned from New Zealand in late January Puffa took down the coaster and I enjoyed his cash momentarily, before donating it in yet another ill-conceived spoofy final. I had a skill for that.

Although it now offers a broader range of tap beers I’m sure we only drank West End Draught in either schooners or butchers. My A3s cricket captain Kym Ryan took his lager in a handled mug, and this seemed sophisticated. In 1986, it probably was.

Early one morning during our last year in Singapore my cousin Puggy- called a “smack head” by Puffa as often as anyone- sent me a message to say that the iconic publican had passed away.

Trev and I called in a while back when in Kapunda for Woodsy’s birthday. We invested a vigorous hour as the pale sunlight bent through the windows, and I expected Puffa to burst behind his bar and bark, “Hello smack head!”

When next in Kapunda I urge you to visit and enjoy a butcher of West End Draught! But not a game of spoofy. 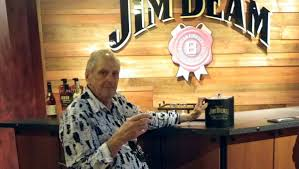