In Caddyshack one of Rodney Dangerfield’s much-loved lines is, “Now, I know why tigers eat their young.” He’s speaking of Judge Smails’ disagreeable grandson Spalding (I want a hamburger. No, cheeseburger. I want a hot dog. I want a milkshake. I want potato chips.) but could be referring to the Richmond Football Club, for this club has a tradition of enthusiastically self-devouring.

Regardless, there’s still universal affection for them. Who can hate the Tigers? Hands up if you’ve had or heard the following conversation:

“So who’s your second team?”

“They’re just a likable team, and never cause anyone harm.”

“Yeah, exactly. And how great was Richo?”

“Yep. And they’ve got the best song.”

Adelaide’s Tom Lynch is a late withdrawal because he didn’t complete a late withdrawal, and he’s flown home to attend the birth of his child. Richmond’s Griggs gets the first goal, but it’s reviewed to generate some theatrical tension for the assembled unwashed, but quickly confirmed.

It’s frantic, but like the front bar of a sailors’ pub in the last hour of shore leave, it’s untidy. Adelaide’s early skill is awful. Finally, we string some disposals together. Sloane receives it wide, settles and goals. Milera impresses with his efficiency. He moves well, has excellent awareness, and dare I say it, shows the poise of a young Andrew McLeod.

With their long kicking indoor footy should suit the Crows, and we witness this when Sloane and Walker transport it the length of the ground with two huge dobs. Adelaide’s now applying pressure and Betts claims Houli in the pocket. He goes back and sets up. Has there been a better shot at goal from a pocket? He slots it. Eddie’s kicking is now so widely celebrated that a footwear retailer should be named in his honour. Twice.

Jarrod Lyons get one for us late, and resolves the age-old dilemma. Despite the inter-continental impossibility, a Lyon indeed, defeats a tiger. New Crow McGovern shows composure to also goal. I’m starting to relax.

Adelaide are direct like a Mt Isa publican, and gaining confidence. Douglas gets his second. Following a corridor turnover, Sam Lloyd records a goal, but almost immediately after a Tiger disaster allows Lyons to get Adelaide’s seventh from turnovers. Richmond deals with the pressure like a drummer auditioning for Spinal Tap.

Seedsman’s proving to be the best thing Collingwood has given the Crows. Ever. Or at least, since the Magpies guaranteed the Crows a 2015 finals campaign by beating Geelong in the penultimate round.

Vickery gets one to give the home side consecutive majors. Then, suddenly the Tigers control everything, and like the William Blake poem, are burning bright within the Dockland’s forests. Against the Tiger-ish mood, the Crows force a midfield error and gift Jenkins a late goal. After a mammoth thirty-four minute, twelve goal quarter, it’s half time.

Today the Barossa and Light Bowls Association First Division grand final is between Eudunda and my Dad’s team, the Nuriootpa Tigers. Like Hawthorn Nuriootpa’s after four flags in a row. Unlike Hawthorn, most of the planet is not hoping for Nuriootpa to fail fabulously.

To open the second half Seedsman takes an excellent defensive mark, and Adelaide quickly moves it the length. In time when he gets the ball I hope the crowd yells, “Seeeeed” to belatedly continue the Wayne Weidemann of Fish Creek tradition.

Richmond persist, but unmethodically. Talia and Reiwoldt are having a tussle. The ill-fated Vickery takes another solid grab, but like an angry lumberjack, bangs it into the woodwork. Rory “Bruce” Laird is cultivating productively, and streaming forward, Ed and Tex (coming soon to your local RSL) again combine.

Sam Lloyd takes a screamer and converts to keep the Tigers within five goals, which history tells us, is not nearly enough for the tricolours. Briskly developing Crow Milera weaves exquisitely around some seemingly extinct Tigers and finds Walker.

Tex looks about uninterestedly, ignores all, saunters back, and bombs it straight into the stand from sixty-five out. Despite the doom merchants this, and other cracking moments, speak to me of the robust and enduring health of our great game.

Now, the Tigers game plan appears less certain than Tony Abbott becoming honorary President of the Onion Farmers’ Association (OFA). But like Tony, Richmond don’t disappear as they should, and with another burst, get three rapid goals.

However, Adelaide asserts itself during the final term to keep the Tigers caged. Shane Edwards gets one after the final hooter, but it’s ninth prize in a chook raffle.

Tigers, if you think about it, are everywhere. On their terrific album Daisies of the Galaxy American band Eels have a wonderfully upbeat song about imminent doom, which I delicately suggest, is most appropriate for Richmond. The Esso petrol-inspired “Tiger in my Tank” could be sung by any of the Punt Road faithful

I bought some rock star ashes

From the back of Rolling Stone

I guess he wouldn’t mind it

They couldn’t sell his soul

The tiger in my tank

Is going to go extinct

And I’m not feelin’ so good myself

I think I’m on the brink of disaster

Well done to my Dad who played in his umpteenth decider, but fell just short of winning his twelfth bowls pennant. So, enjoy your evening. Whatever you do to celebrate or commiserate, can I advise you, on the back of three years in Singapore, to not have any Tiger beer? You’ll be pleased you did. And it’s goodnight from my lounge room. 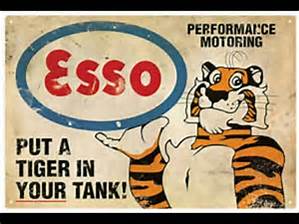 I miss mowing my lawn.

Pushing the Victa back and forth, and then nodding at the tidy rectangle of green. Saturday morning’s cheery chore, so the afternoon can open up.

The Kikuyu tribe is Kenyan, and gives its name to Kikuyu grass. A popular lawn species in Australia, South Africa and Southern California, it’s inexpensive and needs little water. However, because of its swift growth and assertive nature, Kikuyu’s often branded a noxious weed.

Kikuyu a noxious weed? This doesn’t worry Adelaideans. We don’t eat Devon, but fritz! We drink iced coffee more than coke, then give you back ten cents on the container. I love my Kikuyu.

It’s not used at Docklands Stadium. Like a Beckett play its motifs are shadows and dying grass and expensive buckets of hot chips. But the footy’s on and we’re hopeful.

Immaculately bred, but boganishly handled, Ayce Cordy snaps the opening goal, and lurking dangerously upfield, Dangerfield responds after a free. He then misses to either side, and sets a dismal tone.

The Crows dominate the ruck contests, but the Bulldogs dictate in the air, and through Dalhaus, on the scoreboard. Adelaide’s unable to penetrate halfback. With Stringer’s goal, we’re a spooked mess.

Finally getting an inside fifty, we’re impotent. Pick it up! Don’t pat it! It’s not a Persian cat. Did the Crows get on the wrong flight and go via Vladivostok? The siren provides respite.

The bullocking Stringer is sweeping us aside. Dangerfield has another kick from close and misses again. His Austin Powers haircut isn’t helping him, baby. Brodie Smith of the laser leg sprays it wide. Betts bananas it into the point post. Jenkins has an opportunity, and flops it like a fluffed wedge short of the green.

Adelaide’s kicking continues to be crude, and billion-dollar Boyd puts the Bulldogs up by truckloads. Tex Walker goals tidily with his first meaningful disposal. But an unfortunate defensive kick allows a Dogs goal.

Bontempelli is racing towards the elite and kicks their tenth. This is no surprise as his name is suggestive of luxury watches, and I can see someone like, say, Pierce Brosnan and a chunky timepiece on a full page spread in GQ. The tag line would be

I need to achieve so I wear a Bontempelli

The Crows’ kicking is comically poor. Eddie Betts gets one late, but we’re in more poop than a pregnant nun. And then the best Henderson kid, Ricky, gives Adelaide consecutive majors for the first time this evening.

Half time! Why not enjoy a tune from the bursting backyard of lawn-mowing music? I suggest Frank Zappa’s Joe’s Garage and, “He Used to Cut the Grass.” Its guitar solo is xenochronous — overdubbed from older live recordings. In a woeful and insufferable sense, so is BT’s commentary.

The second half commences with the Crows better in the air, but the Dogs more effective on the ground. Well, what do you expect?

Stringer gets his fourth with frightening ease. And then he embarrasses Hartigan again, who must want to disappear down the race, and get a taxi with tinted windows to Tullamarine.

Crameri snaps accurately and it’s now becoming gruesome. Then, after the bounce, Rory Laird slaps the kicked footy away like Kareem Abdul Jabaar, but a Dogs’ mark is paid. Goal.

I decide now would be a good time to take up ironing, but imagine an electrical fault incinerating all seventeen floors of our condominium. Still, as long as our TV was engulfed by fire early.

I glance up from the history of Finnish biscuit-making website in time to see Stringer inexplicably alone in his fifty metre arc. He goals. He has six. Adelaide doesn’t.

Tex gets the footy in the open, and strikes it as high and wide as a Warner cover drive. Lin Jong goals from the turnover. They have half a dozen for the quarter. Adelaide manages a single point. It’s an unholy torrent.

To open the last period the Crows bomb it to Eddie Betts who is surrounded by four Bulldogs. It’s not even a prayer. Dangerfield then takes a mark, plays on, evades and goals. Stringer is subbed off with a sore ham-stringer. He’s been colossal.

Betts sneaks one over his shoulder, but as advertised on their website, the Dogs are thinking about the free popcorn and discounted pies on offer after the siren. The Crows should avoid the pies, as they’d surely fumble them, slop scalding mince onto their groins, and then miss a month.

Wikipedia then tells me coloured socks were first knitted by the Egyptians at the end of the first millennium AD. Annoyingly, Sandy Roberts distracts my research, shouting that Betts has kicked another.

So I depart with the words of an American humanist poet. No, not Walt Whitman’s, “I believe a leaf of grass is no less than the journey-work of the stars.” Instead, eccentric green keeper Carl Spackler, exploring his relationship with grass in Caddyshack:

This is a hybrid. This is a cross, ah, of Bluegrass, Kentucky Bluegrass, Featherbed Bent, and Northern California Sensemilia. The amazing stuff about this is, that you can play thirty-six holes on it in the afternoon, take it home and just get stoned to the bejeezus-belt that night on this stuff. 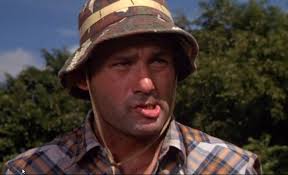