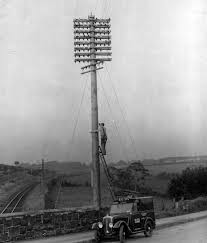 Glen Campbell is waiting in the studio for a song. He has an album to finish. A courier rushes in with a cassette. The Wrecking Crew, a collective of session musicians, gets to work.

The song is ‘Wichita Lineman’ and the writer Jimmy Webb. Under pressure to finish it, he sent an incomplete version, but heard nothing back. Bumping into the singer weeks later Webb said, “I guess you guys didn’t like the song.”

Campbell replied, “Oh, we cut that.”

“It wasn’t done! I was just humming the last bit!”

I wonder if Jimmy Webb ever finished his lyrics. What might he have said? What else might he have taken from the lineman’s interior monologue? In the original he moves between the immense three of love, self and work. What else is there?

If Webb had now penned a third verse I’m unsure I want to read it. Would it be like painting a hat on the woman in the Mona Lisa?

The song’s superb just as it is.

Lengthy songs have always fascinated me for their enhanced narrative possibility, and I enjoy entering these protracted sometimes strange worlds. I find The Doors’ ‘The End’ (11:43), ‘So I’m Growing Old on Magic Mountain’ by Father John Misty (9:58), ‘I Heard It Through The Grapevine’ by Creedence Clearwater Revival (11:04), and Frank Zappa’s ‘Billy the Mountain (24 minutes) are all, for me, enduringly absorbing.

Early in our post-Sweden isolation, I was scanning the alternate music website Pitchfork when I found a post on suggested music for these uncommon times. Seeing the song title ‘Wichita Lineman’, I leant closer to my screen. It was the famous song but a cover version by the Dick Slessig Combo. No, I hadn’t heard of them either.

There was a YouTube link and my search indicated that the song wasn’t on Spotify. Indeed, trawling the internet I’ve discovered that they’re from LA and formed after the demise of cult group Acetone with guitarist Mark Lightcap common to both. They pressed a few hundred CDs. That’s about it.

Clicking the link I hear a slowed, almost eerily subdued set of notes. The iconic melody only arrives after seven minutes, and the entire piece – ‘song’ seems inadequate – drifts and hovers with guitars quietly climbing before falling away like an elderly priest. Over its 42-minute duration it’s entirely instrumental.

The soundscape conjures both the empty landscape of Kansas and the protagonist’s mindscape with graceful use of tremolo and reverb.

Vast and sprawling, it evokes Webb’s everyman “apparition.” It’s not sad or lonely but rather about aloneness. There’s deep beauty carried in the music and a compelling, respectful fragility. It probes and portrays.

Like the original, it’s inward-looking but also a meditation. Given the deep and universal thoughts of Webb’s character, the existentialism is expressed perfectly with the sound flowing like an ancient holy river.

The occasionally maligned Billy Joel once said “Wichita Lineman” is “a simple song about an ordinary man thinking extraordinary thoughts.”

The Dick Slessig Combo offers an exquisite tribute and exploration of the song’s haunting, singular image.