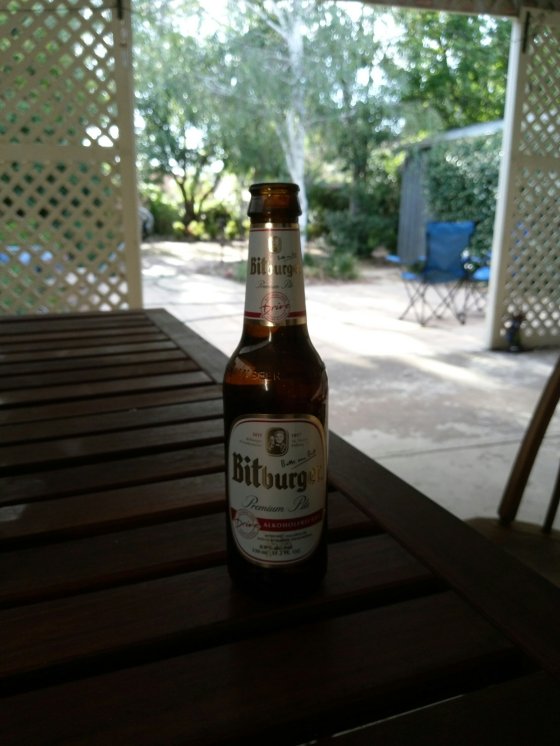 Imagine the worst beer in the history of our bluish green planet.

Horrible, isn’t it? Ghastly, offensive, and a reminder of all that troubles you. You shiver, involuntarily at the memory.

Now, imagine it again, but make it twice as bad.

Gritting my teeth, I sat down to begin my work. Tried to unscrew the cap. No. Bitburger, like computer, says no.

I needed an opener. Or as my old mate Dick used to call them a Bill Lawry.

Why would they make drinking these beer-free beers difficult? Maybe, I’m thinking, there’s deeper magic at play here. The brewers realise how dreadful they are, and are trying to save you from the horror. In a weird way, they actually care for you and your well-being.

The aroma is distinctly Bitburger: sharp, aggressive and confronting like the stocky, pimply Year 10 boy who tries to intimidate you on your first day of high school. All snot and snarl. But, unlike Bitburger, there’s a chance that once you get to know the boy and perhaps play footy with him and listen to some Supertramp records together, you’ll become friends.

Once, years ago, up in Clare for the October long weekend, old mate Bazz asked me to buy us some beer. Looking back, I must’ve been suffering undiagnosed concussion because I returned with a box of Bitburger.

With pure hearts and expectant smiles, we cracked a couple open and taking a sip, Bazz then remarked, “Buy any of this ever again, and our friendship is over.”

I glanced downward in shame. I then looked over at the beer. Mmm. Only twenty-two were left. A sullen pall settled down on us. In time we recovered, and earlier this afternoon, and without adult supervision, I bought one for scientific purposes.

And dear reader, to spare you the awfulness.

At this point in the review I’m tempted to insert a string of metaphors to describe the taste of Bitburger 0.0%. I could write about it being like making love in a canoe (again as Dick says) or that it’s for bathing in and not drinking (as Andrew says) or I could invoke German high culture with reference to Bach and Wagner, and Mozart and sauerkraut and then speak of the global disgrace that this beer is, but I won’t.

So, I spent the curious sum of $3.09 on this, and now my social responsibility in warning you of this is done. Taking the bottle to the recyclers will net me ten cents and when the young man hoicks the bottle into the crate the sound of smashing glass will be akin to sighting the Brandenburg Gate on a summer’s day or hearing Ride of the Valkyries.

Excuse me now and thank you for reading. I need a Coopers Sparkling Ale.