Another mild afternoon and I’m pleased to arrive before sunset to enjoy the interplay between light and shade and architecture and the human form. And also to enjoy the beer. It’s steak night, but despite the eager salespitch it’s too early for me.

There’s two rooms in the beer garden, and as I’m training myself or maybe the pubs of Fitzroy are training me to look up, I see upturned umbrellas and an old, stylish bicycle. Bicycles are everywhere in this suburb. There are a rich symbol of all that’s good here.

I suspect it divides the punters but I like a Chesterfield in a pub. There are no candles but instead bedside table lamps throughout the front bar. A former employee swings by with his new born girl and the bar staff are excited. It’s great to see.

Having necessarily ignored the Bridge Road stout given its 12% punch I finish my Four Pines Pale Ale and depart, both garden and bar now bursting with cheery folk. I’d happily return.

Approaching this pub it’s white and bright and lit up like a Madrid square. Stepping through the front door it’s darker than a Thai cave but boasts beautiful stained glass windows.

Sitting in an ante room the Doobie Brothers are playing and a family is eating in the dark. I’ve been in brighter ghost trains. Throughout the pub are large, satirical Phantom artworks that explore gender politics.

I sip my Moo Brew Pale Ale and John Fogerty finishes “Green River” and we move to an early Miles Davis number. Next to me (I think) I overhear another ubiquitous footy conversation, this time about the Sydney Swans and the possibility of yet another late run at the finals.  Back in the front bar two women are talking of travel and trees- “It was beautiful and under it was just like a room.”

The first thing I see is mightily impressive. It’s the take away drinks fridge in the front bar. Standing beside two women who are eating steak I order a Beechworth Pale Ale. One has a guitar case next to her.

On my way to the huge beer garden- again with many separate spaces I note that there’s much Fitzroy footy club memorabilia. It speaks to me of pride in the past and a certain defiance, but I also suspect that this is a suburb still in mourning for the loss of its team. I wonder how many locals now support Brisbane? How many in this close, vibrant community connect with a team thousands of miles away in the muggy, ambivalent north?

Out in the beer garden it’s dark. I’m almost the only punter not wearing black. In a function room there’s a clot of attractive, smiling, young suits who’ll soon inherit our catastrophe.

Boonie, Elvis and Keef photos are above the bar, all brilliant in their excess and singularity. What to make of the visual overload? Is it pollution? Is it competing for the narrative or there as comic relief? Or just stuff to look at while waiting for your drink or friend?

I enter to Dire Straits working their laconic way through “Sultans of Swing” and take an inner gasp as I consider that this song is now in its fifth decade.

Some young lads are playing pool and of course, like all contests there’s thrills and disappointments, equally. Wandering about, I see a bloke ascending the stairs. One of life’s eternal mysteries is what lies at the top of the stairs. I’m always intrigued. Before he disappears I yell out to him, “What’s up there?” He replies, “The smoking area.” I stay on the ground floor.

With Newtowner Ale as brewed by Young Henry in mit I find a spot by the window. The world moves by. These are big windows letting folks look in. Most other Fitzroy pubs I’ve seen are secretive, daring you to wander in. It’s breezy out. 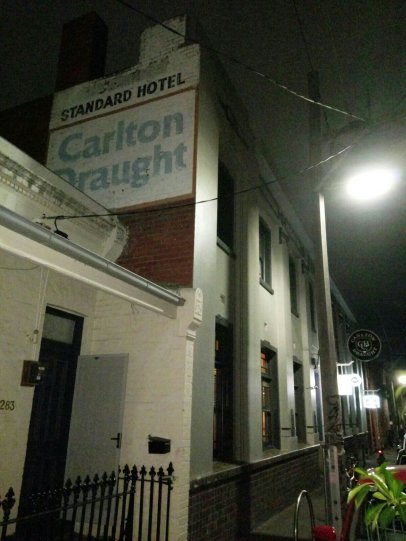 Like others in the suburb, Labour in Vain displays a concerted dedication to the past. There’s nothing contemporary on the walls or in the space. Why? Maybe pubs are places of escape, a refuge from our saturated lives. And the past is always a distraction, good or bad.

Billy Corgan’s whiney voice suddenly fills the bar with a Smashing Pumpkins’ song that like most of them, I find overrated. In the 1990’s they did nothing for me. And now they do double that.

To employ a cricketing metaphor, DNB.

For two pubs earlier I got a message from David Wilson offering to meet for a beer. I’ve heard the term disruption used recently in various learning contexts, and guess that my plan now enjoyed a happy disruption for I returned to the Napier and found David in the front bar and we chatted about cricket and footy and family and work and writing. It was great and I thank him for this.

I’d had myself an evening.