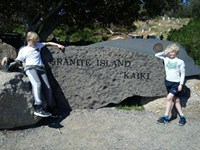 Of the bounteous opportunities we have here clinging to the southern coast of this wide land, circumnavigating Granite Island is, for mine, among the best for our occasionally battered souls.

Beautifully situated an hour from Adelaide and connected umbilically to Victor Harbor (note the inexplicable American spelling) by a causeway, Alex, Max and I set out enthusiastically in the gap between Easter and Anzac Day (depending on your view, either two grim or celebratory holidays) as the affirming autumnal sun drenched us with healthy effervescence.

The horse-drawn tram was also on holiday (possibly still partying in honour of the equine heroine Winx) so, gun-barrel straight, we galloped across to the island with the boys chatting ceaselessly and in that lovely, unconscious, yet stream-of-conscious way only the young and excited can.

Their old man was buoyant too so for reasons I still can’t quite unpack we found ourselves at the kiosk prior to and not following our moderate exercise. Like a pickpocketed Dickensian character, before I knew it the boys had persuaded me into a pair of chocolate milkshakes.

Such is the passage of time and the unrelenting effects of inflation that the $5 milkshake Mia Wallace and Vincent Vega shared in Pulp Fiction had long since lost its shock value and Alex and Max briskly slurped their $6 refreshments, completely unaware of any cultural and fiscal dissonance with the iconic filmography of Quentin Tarantino.

We trekked in an anticlockwise fashion and shared the gravel path with folk from across the seas and across the road. It was one of those utterly self-contained moments in which we were constantly in the company of others, yet felt no need to interact, or to broaden our world beyond our complete, little bubble. Some days, we is all we need.

Happily, however, the boys were unrelenting in interrogating the island. They rushed constantly along the path, before like an old sea dog, or Quint from Jaws, I reeled them in. They scrambled up and over the smoothed and the ragged outcrops while paying attention to my startled wishes that they not endanger either themselves or the part of me that suffers from incurable and eternal risk assessment. 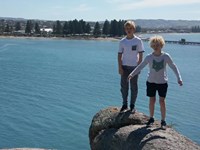 On the island’s southern edge Alex declared, “The ocean here is normally cold as there’s nothing between us and Antarctica.” I felt gratitude for his global insight as I reflected upon my own worldview at his age which was, “Gee, Angaston Oval is a muddy poop-heap in August.”

The town-side of Granite Island hosts a distinctive ancient tree with stripped limbs enticing young climbers. Each branch appears as a blonde vaulting horse and indeed, upon our last visit Alex was riding its sturdy frame until, like a character in a deleted scene from Blazing Saddles, he slipped several feet directly onto another blonde bough in a way that I could tell, caused considerable shock to both his face and his groin. I could almost hear a fast-plucked banjo. I may have yelped. 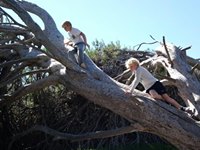 Rounding the gentle final curve we took in the long sweep of Encounter Bay and The Bluff, and bemoaned the old, dry hills. A week or so back Alex had declared that when he was older he’d live in Victor Harbor because it was “really cool.” Max then countered how he was going to dwell in the viticultural gem that is South Australia’s Clare Valley.

Of course, he added in what really should be a surprise to no-one, “And Utah.”

We then eased onto the sparkling causeway and the boys, like tightrope walkers, tried to travel the entire distance balancing on a single rail-track before we reached the car, sitting patiently by The Crown Hotel.

A few minutes later we were barbequing our lunch just behind the clean, dappled beach.