Yesterday I went to the funeral of my dear mate Bob’s brother Jeff. We all went to Kapunda High. He’d passed away too soon. He left a young wife and two daughters. He was 48.

The service was in Gawler and closed when the casket was draped with a Hawthorn footy club flag and their team song was played on a loop. Training as a junior with Central District he’d idolised Johnny Platten.

Jeff was laid to rest in the church cemetery where a couple decades’ prior he’d married a local girl. Atop this hill just outside of Saddleworth, the wind roared from the north in that menacing, apocalyptic way, as the temperature screamed into the hundreds. Fahrenheit, as always, seems more appropriate for these timeless occasions.

In the interim we called into the Gilbert Valley pub. It’s one of those places that has the take-away drinks fridges in the bar itself. Puggy and I had a quick pint of Session Ale. In a corner below the tele two chaps wearing farming equipment hats were slumped. For some reason the screen was showing an old movie, and not the cricket. They were drinking West End Draught cans.

There was a reception at the bowls club. While the party pies, sausage rolls and scones were all in attendance the sandwiches, of course, were uniformly excellent. For the first time in ten years I saw a girl I went to school with Gert*, and her husband Kempy* against whom I’d played footy and cricket. Again I was reminded of my unbreakable home bonds of school and growing up. On a day of mixed emotions this was a lovely moment.

Mid-afternoon our convoy of two conveyances set forth towards Marrabel and its singular pub. I reckon I’d last been inside in 1986, and as near as I could tell all was as I’d left it. Most of us opted for a West End from the keg, largely on account of it being the only draught option.

Marrabel is a town known for its eponymous rodeo, and so we searched the pub wall photos for Kapunda’s champion bull rider and colourful identity, the late Les Cowan. One of the Hayward brothers, Hollis, and I reckon we spotted him clinging to a vertical beast, frozen but waiting for the eight-second horn. However, the memorbilia had no caption so we couldn’t be certain.

Among the flow of cricket stories, both recent and prehistoric, we then paused to toast Jeff, while Chris also hoped that 2019 could be funeral-free.

We then pushed on through Hamilton where there were four churches and a now vacant shop. I wonder how many kids live there today and go to Kapunda High. There was once a dedicated school bus. The earth is desperately brown and scorched.

As always it is a treat to call into the Allendale pub. It is cosy, welcoming and inn-like in its charisma. Happily, Greenock Creek ales are on tap. Indeed, two of the four offerings are from our old school mate Chris Higgins and his thriving micro-brewery. A trip home, even amid awful circumstances such as those of today evoke much, both good and bad.

It was time to continue our cricket reminisces. Of course we spoke of the Lyndoch Cricket Club which at tea breaks provided the most gentlemanly afternoon tea, all scones and egg sandwiches and pleasant conversation.

First experiencing this as an eighteen year old- the day Wocko took a hat trick- made a mark on my young self. Of course, once this culinary interlude concluded and the locals again stepped across the mythical white line psychopathic hostilities resumed. Both accompanying cousins, Froggy and Puggy understood.

I then dragged out the old chesnut concerning Rodney Hogg and his debut appearance at Mildura’s Willowfest. Handed the ball the recently retired Australian quick heard from the boundary, “Bowler’s name?” The captain answered only to hear, “One ‘g’ or two?”

Finally we adjorned to Kapunda’s Prince of Wales. It was the natural conclusion for our day. Although only six in physical number our party expanded courtesy of the anecdotes. Froggy and Hayward the Elder had a moment of faux disappointment concerning some confusion among the beverage orders. 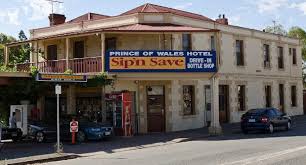 Night was gathering when we then heard of the night at the Mickans when Paul E. White, having smoked the brothers in cards, starting counting the cash. One of the brothers Mickan admonished him saying, “You know it’s not etiquette to count your money while still at the table.” His voice rising its customary couple octaves, Whitey retorted, “I’m not counting my money d**khead, I’m counting yours!”

The good that comes of funerals is community and connection, and the silent vows we take from these to live well, to stride with purpose and to take care of each other.

It is how we can honour the deceased and ourselves.

2 thoughts on “Four pubs and a funeral”