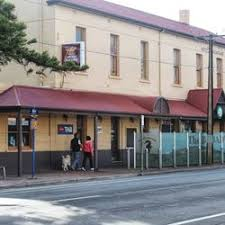 I write today with shame in my heart.

As this modest blog moves into its fifth year I apologise to my small and disturbed audience.

I’m yet to pen a pub review.

In the heart of Singapore is a historic convent called Chijmes, largely because it began its impressive architectural life as Convent of the Holy Infant Jesus Middle Education School. It’s now a maze of restaurants and grog-shops, and the wife and I liked going there occasionally, of an evening. It had a Hog’s Breath Café. We celebrated our anniversary there once; Chijmes, not Hoggy’s.

Among Chijmes’ attractions was a bar in a sunken courtyard that has a name rhyming with Harry’s. One night this happened.

“Sir, the beer is now cheaper because it’s happy hour.”

“But aren’t these normally fourteen?”

I instantaneously vowed to never go to Harry’s during its utterly fecking miserable hour, which I think I’m suggesting is each of its fecking opening hours. You’d have more fun chasing John Howard and his track-suited self about Kirribilli through some July sleet whilst personally enduring a particularly vigorous bout of diarrhoea.

No such problems at The Broadway in Glenelg South. Despite being a resident of the area on and off over the last couple decades I’m a recent convert to the collected charms of The Broadway enclave.

It’s parallel to the more celebrated Jetty Road, but superior in myriad ways. Named for the small town in Worcestershire in the Cotswolds- we ate lunch in one of its pubs one autumn Sunday, it may surprise you to read- it presents and functions as an English village but with generally better weather.

It has Glenelg’s best butchers, fish ‘n’ chips, book shop/café, dental surgery, pizza – Pizza on Broadway although it’s actually on Partridge Street; I guess Pizza on Partridge may have led the munchers to think they were getting roasted spoggy on their Italian takeaway, and I’ll admit this is a niche category, the best restaurant/dry cleaners in a former petrol station/ garage.

The Broadway pub is great. Most Fridays I wheel in there around 4.27, depending on traffic and invest an energetic hour. I get there then because I have a medical condition which renders me physically (psychologically, spiritually, mentally etc) unable to remain at work beyond 4pm at week’s end. After this time it’s also not possible for me to guarantee the safety of my colleagues, and I’d rather not end up on A Current Affair.

For a brief, deluded period I frequented a boozer much closer to home, near the Buffalo, but it was also frequented by clots (I employ this metaphor advisedly) of high-vis chaps, who seemed to have been in the pub since mid-morning, as they were bleary-eyed and looking like they might thump some strangers. This idea has decreasing appeal for me so I decamped to the Broady.

The bar staff, led by Gavin, is attentive and anticipatory. There’s a flock of TV screens showing lots of sport, but these are turned down low and a Triple J- type playlist drifts across the pub-o-sphere. Last night I heard The Smiths and Queens of the Stoneage. I’ve never heard P!nk. On Saturdays there’s a warmer bursting with snags, and a loaf of bread nearby to keep the punters happy.

The house next door was recently bought and its front yard; turned into a beer garden (how good would this really be? A garden that grew beer!) from which you can watch folks exiting the neighbouring dentists; one hand nursing their numb jaw, the other nursing their bruised wallet. 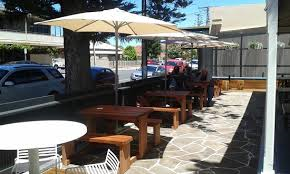 A while back I made a solemn promise to my old mate Bazz. I said I’d ring him every time I went to the pub. Not out of any deep human concern; I just thought it would be funny. And now, about a year in, when I ring every single Friday at 4.45pm I seem to go through to Bazz’s voicemail. It’s a mystery.

Yesterday old mucker Trev* joined me and we had a terrific hour. As old school mates we moved between the sunny nostalgia of old friends and old music and old times. We laughed, as Les Norton used to say, like drains. We dissected and discussed and were merrily diverted. Of course he immediately referenced this line from The Blues Brothers when Jake is talking with Bob from Bob’s Country Bunker

I’d better check up, see how he’s doing, see I have to sign it too. I usually sit in the car and write it out on the glove compartment lid.

And, courtesy of the Broadway’s excellent happy hour, we did it over six dollar beers which, of course, starts the weekend in an appropriately brisk and lively style. If a pub’s optimal function is to replicate your lounge room then this pub succeeds, easily.

Next time you’re in Glenelg South, give me a shout, and I’ll sneak in there with you, and let you buy me a beer.

4 thoughts on “Finally, a pub review: The Broadway”