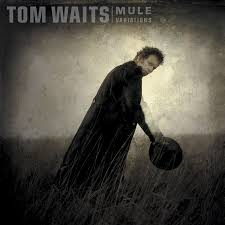 I love Tom Waits. His music is a dark world and explores life at, and beyond, the margins. It’s rich and frightening and funny. I wrote a short story based upon his classic from the album Mule Variations called, “What’s He Building?”

Well, the house is nearly prepared. The windows are fixed, and the leak in the cellar is patched. I pulled up the grimy carpets, and treated the ironbark boards, and now during clear mornings, with the sun rushing through the skylight, their flaxen warmth reminds me of the timber floor in our old house.

The street is quiet and pretty. As they’re keeping a respectful distance I’ve not met any of the neighbours. Their properties are modest with immaculate lawns, hedges and solemn, reassuring facades.

Up on the corner, by the reserve, a car’s parked in a driveway. It is the identical colour and model as Jane’s old car, remember that horrible burnt orange? Can you believe this? I wonder what happened to that Datsun. It defined her in so many ways. For many people, a car is just a way of conducting life’s business, an economic necessity in which no personal investment is made, or creative expression is given. But even the dents on the doors echoed Jane’s cheerfully chaotic outlook on life. I’ve never seen someone abuse a gearbox like that! Long before you’d see her you could hear her coming down the road.

I’ve enjoyed working on the house. It’s been calming. Rejuvenating. Dare I suggest remedial? Some heaven-sent physical exertion, during which I’ve used muscles ignored for years. It’s been a transformation from living primarily in the spiritual. I’m finally beginning to understand what Bill meant when he’d say, “People shouldn’t live too long in a single house.”

The front yard might one day become a garden. The shrubs had been pruned towards an irritable death, and they’d been left a crazed mess like a bad Picasso. All jarring angles and stunted, agonised shapes that surely have no place in front of a humble bungalow. A faithful priest, every evening in the fading warmth I’ve been watering them, and some tiny green shoots are emerging; emerald stars in a scorched galaxy.

A man from the telephone company came by just after lunch, and said that the line should be operating by the end of the week. That’ll be good. Another little victory. Isn’t this all we can hope for in life: a succession of little triumphs? Do you think I could call over the weekend? I think I’ve got your number in one of my notebooks. If not, I’ll phone Bill to get your number. He’s sure to have it. He is so very reliable, he’s mechanically sound.

Hidden beneath a sheet in the garage I found an old barbeque. It must belong to the former owners, so given what happened there, I guess it’s now mine. Feeling thrilled with this slight surprise, I took it out the back by the rainwater tank, and hosed it off. Some spiders scuttled off across my lawn while the muddy water cascaded off the metal like toxic rain. Later, the barbeque hissed and spat like a gruff football coach, and cooking my meal, I heard a dog barking in the middle distance, from down near the creek. Its yapping seemed to protest a catalogue of sharp disappointments.

As the dark fell upon me I ate the meat. I thought about how quickly life can change, like an earthquake rumbling up from a previously undetected fault line. The cruel seismology reminding us, as if this was its only function, of how suddenly jolted people can be. Just like spiders sent from a private space, into an unexpected world. I had the radio on and that new song by the Beach Boys came on. God Only Knows. Such symphonic melodies, and handsome singing, as it extends its love, like a heart attack.

I wheeled the ticking barbeque back into the garage, and like a ghost made corporeal, put the white sheet back over its exoskeleton, and went into the house. Washing the dishes, I looked out my kitchen window. Above my fence the neighbour’s back light was on, and it shone warmly, stupidly into the velvet.

2 thoughts on “Weirdness and Tom Waits”