It’s a scene to make you smile. Two girls and a brown kelpie pup jumping and running, laughing and barking as the late afternoon sun bends through the eucalyptus trees. Their hot perfume hangs in the blue air. All across Australia families like this one are enjoying their Sunday afternoons, as this exceedingly hot summer stretches out.

While these children appear happy in the golden light, the shadows are lengthening, for they and their mother live in a state of apprehension. At the insistence of their father, they are drifters.

Tom Smith meets me in the front bar of Cobar’s Railway Hotel. I offer to buy him a beer, and he says, “Fair enough too. With your fancy city job, you can afford it.” I decline to explain that as a cadet journalist I’m probably earning less than he is, and ask, “How long have you been in Cobar?”

He looks me in the eye, takes a long draught from his beer, and wipes the foam from his lip. “Let’s see. I reckon it’ll be four weeks next Tuesday. Time to go,” he clips. There’s defensiveness in his voice, a challenge, as if he’s daring me to argue. I imagine he’s exchanged fisticuffs in a Friday front bar before. “Why are you leaving?”

As the clock ticks towards six, the pace of drinking accelerates. It’s hot, smoky and the men yelling at each other is a slow-motion explosion of noise. I lean in towards Tom to better hear him. “Shearing’s nearly finished. Job’s done. We’ll head south towards the Murray. Grapes’ll soon be ripe. Plenty of work pickin’ ‘em. I know a bloke in Mildura. We were there four or five years ago. Not long after Susie had her accident.” Tom glances up at the clock. Quarter to six. Impossibly, it becomes louder in Cobar’s biggest hotel.

“Can I ask what happened?” Susie’s the youngest daughter of Tom and his wife Mary. To make ends meet, Mary gets what work she can too. Cooking for the shearers, helping out in the homestead. Both work long hours. Hard, physical labour. “Fell off a fence. Cut her leg badly on a rock, and ripped her calf muscle. Still walks with a bit of a limp. I’d told them girls to stay away from the fence- some of the timbers were loose.”

I study Tom again. His face is weathered brown from years of vicious outback sun, and his eyes are set in an endless squint- even here in the pub. There’s honesty in our conversation, but also a reticence to tell a city stranger too much.

Later as she cooks dinner for her family I talk to Mary, while Tom sits outside. Susie and her sister Jane are throwing a ball to the dog. Dusk descends from the sky. The meal is mutton chops, carrots, peas and mashed potatoes. Resting my elbows upon its laminated top, I sit at the table. “Are you looking forward to Mildura?” I ask. The chops sizzle and spit in the pan. Mary’s eyes scurry across to me. “Is that where we’re headed?’ Her question doesn’t surprise me. Outside in the dusty heat, I hear Tom cough.

“Yes, Tom told me at the pub. Does he…” I pause, worried about marching into their marriage. I’m not sure I’d like what I might hear. “…you know, does he usually ask you about where you’d like to go?” Mary wipes her hands on her apron, and turns to me. “Can I tell you something?” I lean forward. “Please.”

I see tears at the corners of her eyes. “I’m tired. We’ve been drifting for over ten years. Never been anywhere longer than a couple months. We met in Kingaroy. Queensland. Got married. Back then, Tom had plans. Wanted to be a fisherman, you know, get his own boat.” I take a sip from my cup of tea. “What happened?”

Mary pours milk in with the potatoes and starts rhythmically, but cheerlessly working her fork into the boiled vegetable. “A few months after we we’re married Tom’s best man Jim drowned. He was on a prawn boat off of Cairns. Huge storm swept in. They got caught in it. That was the storm of ‘53. Six boats went down. Twenty-three men lost. Tom vowed he’d never set foot on a trawler. We decided to head south and follow the work.”

I offer, “Ten years is a long time.” Mary wipes her eyes with the apron, and whispers, “The girls need friends. School. They could play tennis….” She stops, as if her words are forbidden, an unutterable prayer. Tom’s boots blunder up the corridor. He kisses Mary on the head. “What’s for dinner, love?”

On the following Friday Tom and Mary, their daughters and the dog leave Cobar, the ute’s exhaust coughing out bluish smoke as it bumps down the driveway. Tom flicks the turning indicator and steers south.

In Mildura, seven hours away, there are red and white grapes, ready for picking. 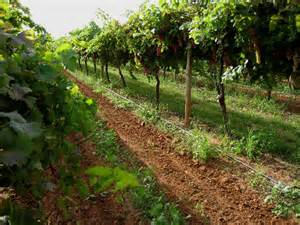