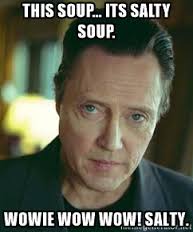 Early start. Lunch at Trier which has the oldest Roman gate in the world. Lots of wurst stands, and we bought some nice strawberries. Saw a few good dogs.

The local cathedral is huge, beautiful and sombre. Ate a couple pork rolls for lunch and were reminded of this frequently during the afternoon.

Made our pay toilet debut. Travelled through Luxemburg- a generous community with zero net migrant intake every year.

Sleepy afternoon on the coach then a Rhine river cruise which was fun. This large boat had an open back deck with striking views of the narrow valley, castle and vineyards. Had a Riesling and a dark beer in a large vase-like glass. Saw the much-feared Lorelei Rock.

Bussed past Frankfurt and had dinner at the motel. Most of the despised food groups were lurking together- peas, pork and capsicum. Starters was a curious local fare we called Salt Soup which is made of ten tablespoons of salt, half a litre of water and seven very scared croutons.

Met and chatted with a Melbourne couple – Clive and Connie who are also teachers. Walked around the block and retired.

Up at 6.30 again- this is definitely not a holiday, it’s a tour. This is the saying anyway and I agree.

Napped our way through the countryside to Nuremburg for lunch. A very interesting city- we visited the old part; some of which was bombed during the war.

Saw a beautiful fountain in the square and made a special wish with the gold ring- for a Hungarian visa! The story of the visa- or lack of: our travel agent did not inform us despite asking numerous times if we needed one. We’re pretty angry, but we’ll worry about it when we get back. Our challenge will be to get one when we arrive in Vienna where it will cost about 500 shillings each.

Back to Nuremburg. We walked up the hill to the old palace and there were good views over the city. Back in the square we bought some lovely dip and bread and artichokes (choke is the word- Editor) from a Turkish stall and walked down to a park on the river to eat it. Cool!

Back on the bus- another nap- we headed towards Munich, but didn’t pass through it. On the way, we saw a lovely big lake (Khem-see) with islands and all in it. All of this at the base of the German Alps.

Soon we’re over the border into Austria where our overnight stop was just outside Salzburg. The pension was lovely- small, family-owned with spacious rooms and a real double bed, finally! Our meal was good and we walked down the road afterwards which was very nice, except for the big, black slugs. Wrote a few postcards (google ‘em kids- Editor) before bed.

Typically early start. Into Salzburg for city tour. Was quite rainy. Our guide looked like Cosmo Kramer, and behaved like him too. And Kerry’s grandpop, Griffy Grace.

Saw lots of Sound of Music sites and places relevant to Mozart. Cobblestoned squares, monastery, nunnery, castle and funicular. The monks’ cemetery was impressive. Ate a couple pretzels. Got passport photos taken for $40! And then the camera broke. Went to internet café, spent a fortune, lost half an hour of trip text. Whilst the city was beautiful, we weren’t displeased about getting the fuck out of there.

Both napped on the bus to Vienna. Arrived at 6pm to discover that the pocket knife was missing (fuck-up number 76). All our clothes and belongings thrown about the large room, we headed off for an Austrian feast and entertainment.

Sat with Morrie and Glenda and Italian/Americans from Virginia (US state, not market garden town north of Adelaide- Editor). Big wooden tables and stools, piano accordion music and generous glasses of wine contributed to the bonhomie. Salads, chicken, sausage, sauerkraut and stinking pork to eat.

Our rotund musician played traditional tunes and Also Waltzing Matilda and Tie Me Kangaroo Down (Sadly, no Shaddup Your Face-Editor).  Quiet trip back to the motel to the strains of Dean Martin.