We’re at the Adelaide Showgrounds. For me these are Sunday mornings and the hipster cool of the Farmers’ Market with organic kale and homemade sausage rolls and artisan bread. I can also hear the rhythmic thud, thud, thud of the Royal Show’s wood chopping. Look! It’s Tasmanian axeman David Foster. Walking in tonight we saw my new favourite sign

No tethering of cattle along sheep pavilion wall after 8.30 am

Please do not bury soiled nappies in the sand

Our boys Alex and Max love watching Monster Jam and its crazed wrecking yard of gigantic trucks. So we’re here to celebrate their birthdays. Monster trucks are undoubtedly symbolic of American hegemony and excess, and yes, the boys should probably instead be attending a Shakespearean Sonnets for Primary Kids workshop, but we’re pit-side.

Because it’ll be raucous, ridiculous fun.

Two decades after his final race Waikikamukau remains the best racehorse name, but Grave Digger is our favourite truck. Monster Jam features dozens of trucks, each with its own cult following. There’s Captain’s Curse, but mercifully no Captain’s Call. I’ve some affection for the truck called Cleatus and its driver Frank Krme whose last name seems to have been heartlessly robbed of a vowel.

None of these are here as they’re in Albuquerque or Biloxi or Chattanooga. However, the local monster trucks are Revenge, The Convict, Wicked, the oddly plural Raptors, Extreme, Monster Patrol, Scooby Doo, Freak, and of course, the Triple M Truck. Look, Triple M footy commentator Brian Taylor is at the wheel. No wait! The truck’s veering about violently. He’s outta control. And now the monster truck is combusting. Wowee!

The pit party’s complete and the trucks start up with the sonic impact of a guitar’s first notes at a heavy metal festival. The crowd bellows. I note the local ice coffee advertising hoardings to the arena’s south, looming like Adelaidean versions of the eyes of Dr TJ Eckleberg. To our east are the hyperbolically named Lofty Ranges. They appear low and brown.

“Are you ready?” asks our host, a cross between Akmal Saleh and Dave Hughes. Located atop a flatbed truck a singer performs, “Star-Spangled Banner.” There may have been a wardrobe malfunction, but Row O of the Southern Stand is too distant to tell. I appreciate how many a NASCAR fan thinks that, “Gentleman, start your engines!” is the final, rousing line of their anthem.

And then the monster trucks are roaring about, impossibly huge as they motor by the jumps and props; largely assembled with old Commodores, and flat Camiras, which have finally made an earthly contribution. It’s a graveyard just as the Holden factory at Elizabeth will soon be.

Max asks, “When are they going to do some big air?” Then the monster truck called The Convict obliges. Suitably in the free colony of South Australia its driver is from the penal settlement of Sydney. “TNT” by AC/DC is our soundtrack. Whew! I couldn’t believe we’d been underway for an entire minute without accompaniment from the brothers Young and co.

I’m reminded of walking between Rome’s Aventine and Palatine hills on the site of the Circus Maximus. I reckon Caligula would have liked his monster trucks. There’s much about the night which is categorically Classical. But it’s also prehistorical, although these metallic dinosaurs aren’t herbivores.

Mountaineering cruelly over a row of car carcasses, Wicked stands up on his rear wheels like something reptilian in a Japanese horror flick. Exotic-looking Monster Patrol does a hot lap, barking past us, and our eldest Alex says, “Dad, I can feel the vibrations on me!” As this is theatre, and not motorsport the dramatic symbolism continues with an intermission, as if scripted by Andronicus.

Like Bear Grylls’ cameraman in Man vs. Wild the nameless star is the forklift driver who reorders the car wrecks and dirt mounds. There’s much lonely precision in staging chaos and commotion for the masses. The anthem singer returns and offers a version of Vance Joy’s “Riptide,” whose opening verse contrasts with the mechanical machismo we’ve seen so far

I was scared of dentists and the dark

I was scared of pretty girls and starting conversations

Oh, all my friends are turning green

You’re the magician’s assistant in their dreams

At the resumption there’s monster trucks contesting in pairs around a tight circuit. It’s announced by the host as “Side by side racing!” Of course, if this were held in the Germanic Barossa Valley he’d have declared it, “Side by each racing. Already.”

Crowd favourite Scooby Doo provides some faux canine fun by jumping, teetering and rolling over! Well, he is a dog! With a busted nose he’s dragged away. His evening seems over. We’re disappointed. It’s like being at a Rolling Stones concert and hearing the announcement that for tonight only Mick’s been replaced by Peter Andre.

Now in the final act there’s trucks going guts-up every minute. That’s what we want! Danger replacing grace. Bolts of frisson. Metaphorical deaths. But more than this we know from the original American TV series that the lyrical climax is the sequence when a truck charges at a dirt cliff, ascends its face, somersaults back over itself, and bounces onto its sixty-six inch tyres. A backflip! In the world of monster trucks, it’s the Triple Lindy.

Here we go! After two deliberate false starts, the truck bursts at the mound, and climbs steadily, vertically. Now airborne high above the grass and dirt, his rear wheels are at their zenith, but gravity’s silent terror begins. The flat earth rushes up at the truck’s flimsy roof. Then soil and metal skin meet. We groan. We’re denied by an uncaring Nero. Like a bosomy matron the forklift patiently attends its duty and rights the truck. The event announcer cries, “He’s back on his heels!” Another roar.

There’s fireworks and these pound our ears and blink our eyes. The monster trucks are done. In the tranquil morning of tomorrow, the Adelaide Showgrounds will open for the Sunday Farmers’ Market. The stalls will again offer organic kale and homemade sausage rolls and artisan bread. 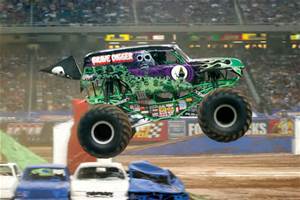