Apart from Vatican City, Monaco, Gibraltar, Liechtenstein, Christmas Islands, the Maldives, Malta and Bermuda, where else could we do a leisurely lap of a nation, eat at a faux New York diner, and be home in time for The Bold and The Beautiful?

The last time I went to the races was at Morphettville three years back to see Black Caviar take the Goodwood Handicap, and post her twenty-first win. We were on the flat about thirty deep from the rails. Such was the squash and blare, we could’ve been at a One Direction concert, except they weren’t born then.

Although I couldn’t see the horse, I knew she’d won. It was fantastic to have been there. A where were you when you heard Lady Diana had died moment, but with a cheerier, Group 1 feel.

In keeping with Singapore’s colonial past, entry to the races was formerly restricted to members and horse owners. Members of public were allowed into the club only in 1960. Then, after about sixty years in Bukit Timah, the racecourse relocated to the island’s north during 2000.

The Singapore Turf Club, the oldest existing club in Singapore at more than 170 years old, now operates from a $500-million racecourse in Kranji. Like Adelaide it’s a single-track city.

It’s fitting that we’re there in the Derby Room with friends from South Australia on a hot Friday evening deciphering the local betting lexicon. A tierce is a trifecta and a trio is a boxed trifecta, while a quandro is the first four, in any order.

Being Singapore GST is payable on all winnings, and the turf club takes a weighty commission on your earn too. The government plays bookmaker, colourful racing identity, and coat-tugger.

The evening’s first mishap is in the second event. A long-term fan of the novelty-named neddy (think Waikikamukau), I’d picked Laughing Gravy, but due to punter error didn’t get on. You know how this finishes.

As is the way at the modern sport arena, TV screens are everywhere. Beyond electronically urging us to bet, they are a rich source of data including how much each horse weighs in kilograms, and how much it’s changed. As I peered down into the mounting yard, several stories below, I saw a conveyance complete what seemed to be a personal pre-race ritual, and I think I saw his weight change from 507 to 505 kilograms.

There’s a grand piano just outside the restrooms. Once an hour a man plays it while a woman sings a Harry Connick song. Why just one, and why apparently only Harry Connick, I’m not sure. They play, “It Had To Be You” from When Harry Met Sally, but I have no Katz’s Delicatessen punting moments all night.

Being Singapore there’s arguably a shopping mall soullessness about the facility. It’s new, efficient and clean. But there are no betting slips on the concourse. It’s a strangely empty space. Despite the panoramic views there’s no fetching sunset. Instead, it’s sunlight, then instantly an unquiet dark cloaks all. Alongside the winning post is a forty-six metre long screen. It tells us the poly track temperature is twenty-seven degrees. I assume this is normal, if not good.

Mid-evening a Dash of Class salutes to cheers from our table. As a South Australian, I’m happy the horses run anti-clockwise, and the outside track has a straight longer than Flemington’s. Encircling the course are about twenty light towers, reminding me of Footy Park in 1984. Look! There’s Kernahan kicking ten in State of Origin!

It could easily be used by NASA, or for indoor golf, and the fully enclosed grandstand is four or five decent drop punts long. I go for a walk, and each section is a replica of the previous one: bar, self-serve investment kiosks, and betting counters like those found in an Australian TAB. The staff are all women, and don’t look at me, but point their eyes at things.

At the Derby Room entrance is a miniature statue of a horse. It has no informative plaque, so it’s possibly there for kids or buck’s show enthusiasts to ride, or to assist customers in identifying the animals ridden outside by small men. There seems to be no celebration of history here. The first Singapore-based galloper to win an International Group 1 race, Rocket Man, could be honoured, but I see nothing.

Our beer girl is embarrassingly attentive and the flow of the Korean lager, Dester, is an amber waterfall. In a thrill for the legion of local Geelong Cats fans, Golden Tomahawk gets up late in the card, but in an attempt to locally connect I’m on the Sun Tze Chinese military classic inspired, Art of War. However, the horse and jockey have not read chapter three: Strategic Attack, and it finishes last. One of the treatise’s famous lines is

All warfare is based on deception.

Sun Tze was right. I have been deceived. Still, it’s been fun, and we’ve had what grandma calls, “a night out.” Our taxi races across the island, towards the river. 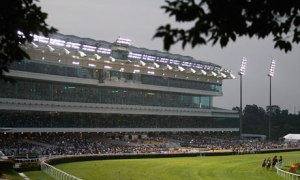 Thanks to our friends Caryn and Brett for organising the evening, and also to our hosts Premier Racing.