I’m going to see if I can write this letter about Iceland without mentioning Bjork. Shit. Failed already.

If all bus trips were as compelling as Sunday’s journey from Iceland’s international airport to Reykjavik then I’d like buses much, much more. Normally I like buses as much as I like, well, buses. It was an eccentric twilight; difficult to see where sky began and earth stopped.

An other-worldly light leaked between the two and combined with the snow and treeless lava fields to make me think of the moons of Jupiter or a post-apocalyptic film. If a Ray-Banned Arnie had raced past our bus on a black motorcycle I would not have been surprised.

After checking in we rushed outside to frolic in the tumbling snowfall. It was familiar- Pizza houses and supermarkets but also distinctly Icelandic with street-signs like Braeoraborgarstigar and Tyrggvagata and the constant, charismatic impression that this city and country are unique.

Next morning we eat a hearty hotel breakfast whilst peering out at the dark streets. Despite it being late winter the sun rises only at 9:30am. Exploring the city we drift down to the harbour through the fluffy stuff and slush and admire the mountains lurching furiously out of the icy ocean. The devilish wind makes us say ‘fuck’ many, many times.

We amble to Hallgrímskirkja which surveys the city from a hill. This church symbolises Iceland: white, jagged and uplifting in its un-European-ness. Its steeple stretches seventy-three metres towards the leaden heavens whilst inside is equally fascinating in its austerity. Barren walls, no stained glass, limited religious iconography.

An organist pumps his mighty keyboard and the church is bursting with sound. But not the pious and sombre stuff of German and Austrian cathedrals. The swirling, psychedelic melodies bring to mind 70’s band Yes and their album Tales from Topographic Oceans which, of course, is wholly appropriate.

Next we trawl Reykjavik for the Phallological (that’s pecker, johnson or willie to many of us) Museum and its sperm whale, arctic fox and bull exhibits. Apparently the late bull’s appendage had been salted (that’s salted Cletus!), dried and lovingly fashioned into a walking stick. This we had to see! Tragically the museum is gone and, eyes weighty with tears, we dragged our feet towards a café and sought solace, as people have since time immemorial, in burgers and fries and refreshments.

Iceland arouses not only a young bull’s walking stick but men made ecstatic by matters volcanic. The Golden Circle tour took us on a blizzardy route past an implosion crater, Gullfoss waterfall and Pingvellir where the North American and European tectonic plates are diverging.

How many can claim to have slipped on the ice, and then their arse, right atop the chasm where the good earth itself is being wrenched asunder by the tectonic plates? My left cheek was in America and my right cheek; Europe. For days my bum was tender proof of this primeval terrain’s violence.

At 66 degrees North, Iceland clings to the Arctic Circle in the mid-Atlantic but the warm Gulf Stream makes it is surprisingly balmy. During our stay it lingered at freezing whilst the locals smugly boast that in 2004 Reykjavik shut down when it sizzled at a record 24.8 Celsius!

Roughly the size of England, Iceland is bigger than commonly imagined but with a mere 295,000, a population similar to Coventry. Whilst more tourists visit each year, in 2004 barely 340,000 nipped by the birthplace of Bjork. Shit. Failed again.

Ale was only legalised in 1989 and March 1 is celebrated as Beer Day. However with barley milkshakes rented at £6 or $AU15 a pint one learns quickly to relish each drop.

Geysers. Not Norf London lads but Iceland’s eco-attraction: steamy, farty gas fountains. Skating across glassy paths among boiling puddles as the horizontal rain and hail gently bruised our faces I contemplated my likely injuries. Slip on the dicey ice and break limbs or slip on the dicey ice and skid face-first into a searing geyser or bubbling mud vat from which I’d no doubt be retrieved by two rangers called Erik who’d then respectfully surrender the messy sack of my parboiled chubbiness to Kerry for dour identification. Still it was worth it. I am confident that no other St Albans-based Australian teachers own amateur video of geysers grumpily erupting, at least, fifteen glorious feet.

Back in the dry of our hotel the TV mercifully thawed us with the Jetsons. In tonight’s episode: George is promised a pay-rise by Mr Spacely! In his excitement he tells Jane, Elroy and Judy to buzz out and buy themselves a few futuristic treats. And you know what? Mr Spacely changes his mind about the raise! Poor George. Like most of the planet, Icelandic television is now a swampy morass of reality rubbish and MTV clones with endless gold chains and slow-motioned, open-topped Californian cars.

Not so long ago there was only the national Icelandic broadcaster and it followed but two peculiar rules. No TV whatsoever on Thursdays and no TV during the nightless month of July. Now, I’d vote for that, wherever I live. A national broadcaster acting like your mum! On a summer’s afternoon she wades into the lounge room, snatches the cricket off the box, and then kicks you out of the house for your own good. And guess what; George’s family, Rosie the household robot and Astro the dog forgave him. All ended well!

The Blue Lagoon is an outdoor geothermal spa and for three hours on our last morning we luxuriated in its calming waters, improving our wellness. Wellness. Surely one of the silliest contemporary words. It was great but odd to have a cosy, submerged body whilst one’s ears were turning blue in a blizzard! Running across the snow from spa to sauna is among the coldest three seconds of my life.

An ancient Viking tradition – feasting on rotten shark meat, escaped our festive plates on this, the island in Jules Verne’s Journey to the Centre of the Earth and we eventually jetted into the lunar dark. Our Icelandic Air flight is delayed because of the snow and then because Great Britain’s entire air traffic computer network crashed.

How many of you have flown on a plane called Snorri Porfinnson? Bjork has. 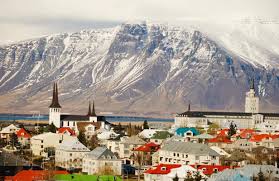 This story is from the collection I call The Ringo Tales which chronicles our travels during 2003- 2006 when we lived just north of London, and spent time in Europe and North America. It can be found on this blog at https://mickeytales.com/2014/02/22/the-ringo-tales/