At the football I thought about Vinnie Jones.

A midfielder, his first club was semi-professional Wealdstone, in North London. Moving to Wimbledon, they won the 1988 FA Cup.

His Guy Ritchie film phase followed, including Snatch, in which he played Bullet-Tooth Tony. Becoming president of the Hertfordshire Agricultural Society in 2005, Vinnie showed what a community-minded fellow he is. Just like Bullet-Tooth.

Glancing about the ground I don’t see anyone likely to be in cinematic demand as an underworld thug. At least, not on the pitch.

I’m at Wealdstone on the first Sunday of the year, for their Conference South clash. Floodlight mingles with the fog. I’m on the terrace with Barry.

Hemel Hempstead is known as the Tudors. Their city’s famous for an infrastructural oddity, the Magic Roundabout, and Roger Moore, universally acclaimed as the fifth best James Bond.

I last saw Barry in 2008, and he’s now married with a son. He befriended me when we moved to St Albans, and after work on my first Friday he took me to the Bunch of Cherries. He sees you as you’d like to be seen. Spending time with him makes me buoyant. It’s his gift.

We slip into our comfortable way of yakking, and turn to sport. “I don’t love football,” Barry reveals at kickoff, “But I love Wealdstone. I don’t care about the Premier League.”

For the final game of 2004/5 we travelled to Salisbury in Wiltshire. Pausing for lunch at The George Inn in Middle Wallop, we failed entirely to acknowledge that a BBC adaptation of Miss Marple was filmed locally.

Nearby are the villages of Over Wallop and Nether Wallop. I’m reminded of Lower Slaughter and Upper Slaughter in the Cotswolds. The rural counties promise abundant violence.

From the football I see Salisbury Cathedral’s 404-foot spire, which has attracted travellers since its completion in 1320. But our pilgrimage is one of simmering anxiety. The locals are teased

I can’t read and I can’t write

But that don’t really matt-er

And I can drive my trac-tor.

Wealdstone was walloped 3-1, although the perilously late goal meant they evaded relegation. As a life event it ranks highly for Barry, and the next day he texted (repeatedly) as if in thankful, blunt prayer

During the last World Cup qualifiers, Ireland played Kazakhstan in Astana, and won 2-1. Over 12,000 attended. Forty-seven away tickets were sold, and as a zealous Irishman, Barry’s brother Shawn was among them.

Barry says. “He used to be the Under 21 keeper for Wales.”

“ Yeah,” Barry qualifies, “but the second choice was a sheep.”

There are two types of football fans. Those who sit, and those like me, who stand. It’s my country upbringing. Boofy clumps of men standing on the wing, bantering like goats, and bellowing at the opposition, their supporters, and the umpire. This, vicar, is how the congregation behaves.

At work I flop into a chair constantly, but will stand at the football all day. Conversation is easier. Hanging stuff on your Port Power mate about his dental status is harder if you’re squeezed into a row next to Nanna and her tartan thermos.

As ball sponsors we enjoy boardroom hospitality. There’s coffee and sausage rolls at halftime. Roast beef, winter vegetables and Yorkshire pudding after the match. It’s better than a Famous Five picnic. Someone within the club prepared it, and not an external caterer. I can tell.

This connects to cricket in the Barossa. Surrounded by vines sagging with fruit bound for Dutschke Wines up on Gods Hill Road, the Lyndoch Cricket Club always provided an afternoon tea of egg sandwiches and refreshments. It invested those days with graciousness. As a young uni student from Kapunda I probably needed help in this.

On the frozen terrace there’s a haiku-like economy in the way Barry and his friends talk. Together, they’ve had countless Wealdstone moments. They’ve no need for elaboration, but I hear warmth in their words. Football’s only part of their pact.

“Take the Metropolitan Line,” suggests pub DJ Chris when I say my digs are near (not in) the Tower of London. I love the passion Londoners have for the Tube. Apart from the Womma station, Adelaideans care little for their transport. “Yeah, but make sure it’s an Aldgate train,” clarifies Barry.

The Underground is London’s cardiovascular system, and its lexicon is evocative. Hammersmith & City. Bakerloo. Jubilee. “Don’t get caught in Tottenham Court Station,” is the final tip. “It’s shut ‘til next Christmas.”

Unlike Henry VIII, the Tudors don’t execute cleanly in front of goal. Wealdstone dominates possession, but is timid in attack. Coming from behind twice, 2-2 ensures they’re undefeated in their last ten outings. However, they’re precariously close to the drop zone.

With the whistle Wealdstone exits the pitch to hearty applause. I’m not sure if it’s ironic, daggy or great, but Pilot’s “January” then bursts into the fog

As my train speeds south I see Wembley and its colossal arch. In the dark western sky it’s a cathedral. It’d be tremendous to take Alex and Max there, but I’ve had myself an afternoon at a tiny match, which matters only to a few hundred devoted folk. 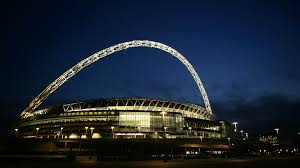