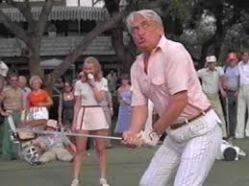 It was a sparkling, jaunty morning. The kind only had during university holidays. Thirty chaps in whispering knots, around the first tee of North Adelaide’s south course.

As casual golfers we’d no experience with a gallery. Rocket, Puggy and I watched Crackshot have a few swings. He’d get us underway.

Exhibiting an opening batsman’s concentration, his backswing was neat. A purposeful downswing. Sixty eyes followed it as it flew up and through the autumnal sky. Remaining patiently on the tee, however, was his Hot Dot.

Now like a crashing Black Hawk’s rotor, minus the Jesus nut, Crackshot’s driver was in whirling flight. Sounding like Rolf’s wobble board it propelled up the fairway, then skimmed across the Kikuyu before finally, as in a Samuel Beckett tableau, it lay motionless and forsaken.

“My palms were sweaty,” claimed Crackshot.

I’ve sentenced boys younger than you to the gas chamber.

Sadly demolished, Kapunda’s Railway Hotel experienced a fleeting infamy, among the ridiculous, by opening at 8am on Sundays, when, in situ, we’d get raspberry cordial splashed in our West End Draught butchers.

Angelin was the publicans’ son. In the hotel ballroom he played me Rick Wakeman’s Journey to the Centre of the Earth. Once. I recuperated. Everything about the Railway Hotel was ridiculous.

But Angelin could play footy. He was a thumping kick, and when he connected, he sometimes achieved the mythological quality known in country sport as “good purchase.”

In the Junior Colts one Saturday at Dutton Park our ruckman, Rocket, got the tap from the centre bounce. Angelin seized the footy in that clean, untouchable way he had. Suddenly frozen as if in a sci-fi telemovie, the Tanunda boys were incapable of tackling him.

He surged towards the half forward line. Fifty-metre arcs were un-invented, but he was beyond that when he bombed it. Perhaps prog-rock had already pinched his conceptual clarity. It was a behind. To the Tanunda Magpies.

He’d kicked it the wrong way.

But, gee, it was impressive.

The history of Spoof suggests English public schoolboys, darkened cupboards and loosened trousers. But for me it’s afternoons in Kapunda’s Prince of Wales, or Puffa’s, as it’s widely known.

Whitey loved Spoofy, and grabbing three coins, he’d jangle them at you with the same cacoëthes as the cat that was bitten by The Gambling Bug in the cartoon, Early to Bet. Whitey always found takers. Laughing, drinking, spoofing. In concert.

One afternoon Whitey lost. Many, many times. It remains a pub highlight even among the punters who weren’t there.

How can it have been so long since I played Spoofy?

Now I know why tigers eat their young.

It was a noble idea. Improve standards by running an evening clinic with Test umpire Tony Crafter. So we congregated in the Marlboro Red fug of the Kapunda clubrooms. Our guest officiated across the planet, but tonight, would field some exotic questions.

Angaston Muppet: Tony? May I call you Tony?

Tony Crafter: You may.

AM: Saturday in the A3’s I bowled a bouncer. And the batsman stuck up his hand and caught it. What do you think?

TC: If he had time to let go of the bat, raise a hand above his head and then catch it, it must have been a bloody slow bouncer.

AM: Well, yeah. But what should happen?

TC: You should give up bowling.

AM: Robbed! The umpire said he couldn’t make a decision. He reckoned I’d run down the pitch and blocked his view.

AM: OK, the umpire can’t make a LBW decision! Could I then appeal to the square leg umpire?

The Angaston Muppet, I’m assured, is currently a senior advisor within the federal government.

Be the ball, Danny.

Milan Faletic was a good average footballer. Turning out for West Torrens and Port Adelaide in over two hundred games, his nickname had pubescent, but lasting appeal. They called him Spoof.

At Port with Spoof was Rod Burton who became senior coach of the Kapunda Bombers when I was a boy. He was menacing. He had mad eyes. Replace shark with Burton and Quint’s still right

Sometimes that shark, he looks right into you. Right into your eyes. You know the thing about a shark, he’s got… lifeless eyes, black eyes, like a doll’s eye. When he comes at ya, doesn’t seem to be livin’

Crackshot, Rocket and I were on the wing by the timekeepers’ box when Burton had a boundary kick in. The box also housed the PA, and during the B Grade club stalwart Bruce Dermody pontificated

Ladies and gentleman. The canteen is selling pies, pasties and sausage rolls. Lollies for the kids. And the liquor bar will open at 2.30 for all your refreshment needs.

We were behind Burton. Deliberately, he pushed off the fence, and launched a mountainous screw punt. Spiralling instantly above the gum trees, the Ross Faulkner footy bisected the posts, and below the mound, down near the weedy trotting track, on the service road, it landed.

Blighty’s goal was but a stab pass.

2 thoughts on “Gambling is illegal at Bushwood sir, and I never slice: five yarns”