Just before our youngest son was born I became, through an outlandish crinkle in the space-time continuum, that most unhinged of aquatic creatures: a XXXX Gold beer ambassador.

An eager supporter of Coopers beer it was a mystifying position in which to find myself, but I remain grateful for all I was gifted: a corporate box experience at the Adelaide 500, the fully-catered BBQ I hosted one autumnal afternoon, and a seemingly endless, almost terrifying supply of XXXX Gold beer.

I call it the year I barracked for Collingwood. 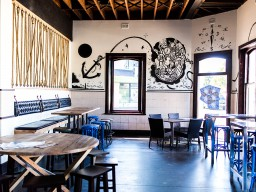 The highlight was a XXXX function at the Holdfast Hotel during which I spent some time with former Australian cricket captain, Allan Border. How good? He was generous and wry and I loved it. I opened by telling him that because of his tenacity he’s my Dad’s favourite cricketer.

He replied with champion modesty, “Well, we all have our own style.”

Later, we spoke of when Warney exquisitely seduced Gatting with the Ball of the Century, and AB commented how fielding at backward square leg he’d not enjoyed a great view of it.

But he then added that during drinks Heals noted in a hyperbolic understatement, “It was a fair seed.”

Once upon a time, The Holdy was the summery destination: post-Test sunburn and panel vans and West Coast Cooler.

Having spent much of the past month indoors recovering from foot surgery the urgent medical advice was to bask in some vitamin D and I’m sure Doc ordered me to accompany this with schnitzel and necessary quantities of Coopers.

In these matters I’m nothing if compliant. It was time to get back to the Holdy.

The street bar offers daily specials, and we leapt at two schnitzels (Snitty Kitty about to resume racing) and a jug of beer for $25.

Coastal value not spotted since on a distant, sweltering Sydney weekend a young AB himself padded up for Mosman. 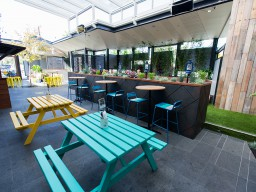 In my misshapen youth beer brought forth in a jug was a wildly exciting event; a bold announcement of intent; a brazen promise of future mischief. Holding a jug of ale like Liberty extending her torch skywards I burst back into the beer garden, an adolescent cockiness in my (limping) stride.

My dining colleague Puggy and I calculated that with this special offer either the schnitzels, or the jug had cost us a solitary dollar. How good? This set the tone for an hour or so of luxuriating in this dappled beachside icon, once owned by another cricketing star, GS Chappell.

There was singular application to the culinary and cuppage challenges. Both food and ale were excellent. 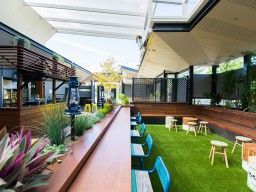 Like many a boozer it has bobbed about variously and is again resurgent, having endured hostile seas a few moons ago. Similar to SK Warne on a hat trick, or with his spiky hair gelled, and about to go on the ran tan, the Holdy is finding irresistibility afresh.

Our only critique is that Coopers Session Ale, the ale du jour, is unavailable from her galaxy of glistening taps. Still, for a former XXXX Gold ambassador, this is a tolerable omission. As Indian batting genius VVS Laxman says, “Pale Ale suffices.”

Named for Colonel Light’s ship, HMS Rapid, which once endured a violent storm without breaking its anchorage, I reckon this pub will hold fast for a century or two yet.