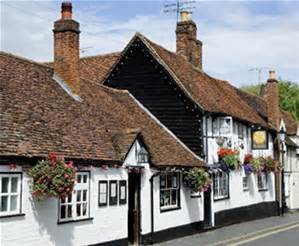 your lunch arrived with scampi, chip and beans (baked not green)

in its tiny garden during those terrifying, thrilling weeks

we designed our new life.

The subsequent summer; Monopoly with Jayne and Karina and actually finishing!

Cheese Club in quaint progress; we watch like anthropologists.

with Emma and George late that May

after she dashed across Verulamium Park

The rose and crown

the sandwich pub & her tranquil fire.

we muse over our hopes and remote home, at a squat table

On a bench by the gushing, gargling Ver.

Astonishing, on every visit, at its impossibly low ceiling.

A jubilant call from Classic Sovereign- The Brambles was ours-

so we were moving from Mrs. Thomas’ B&B

Suddenly caring for that sport on rugby world cup morning

Fruli for you on Fridays and over Hoegarden

in hazy September sunshine, both wide-eyed over cheese steaks

Once proud home of the nine sausage lunch, assembled on a mashy gravy pillow (what a country)

The bunch of cherries

chattering, after school ales (just another half for Fiona) then

cycling home, into the weekend, along the ghostly Alban Way

One Friday as we sip, an ambulance crashes on Holywell Hill (second that week!)

The hare and hounds

after a brisk autumnal ramble out to Chiswell Green

we and Sunday roast and Yorkshire pudding and just the two of us.

curry and naan on metal plates and my mixed grill surprise.

& how, vanishing summers ago, on their first day, mum and dad

recounted stories of our life in that other world; far, far away.

2 thoughts on “St Albans and her pubs: a love story”